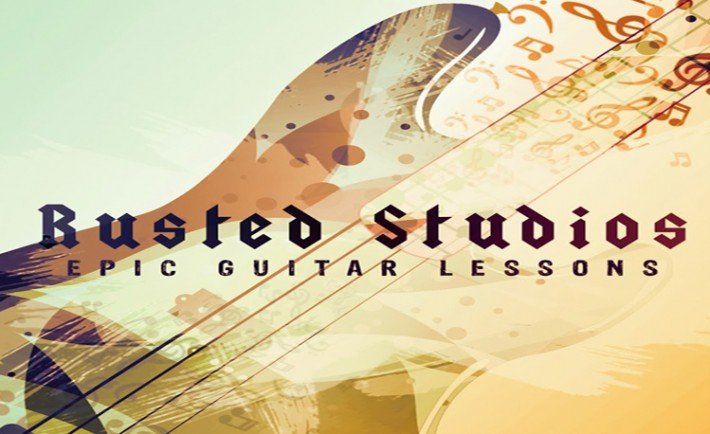 Rusted Studios has made it to the top list of our favorite guitar lesson youtube channels, with over 333K view on their first video they were able to wow the Arab world with their music knowledge and quality production. We got to know the story behind the man in front of the camera, Ziad AlNajdi, and here it is…

When did you start playing?
I started playing guitar in late 2005, just as I started my prep year at KFUPM.
Why the guitar?
On a ridiculously hot summer day, I made the educated choice of staying in and watching a movie. A movie in which the protagonist teaches elementary school kids how to play rock n’ roll. It was unknown to me at the time that this movie will have more influence on me than any other movie I watched. In one scene, the lead actor teaches a nerdy kid how to play the electric guitar. I was blown away by the versatility of sounds the electric guitar could make. I re-watched that movie a few times, rewinding (yep it was on VHS) the parts where they focused on the electric guitar. When I returned that movie to the store and happily paid the delay charge, I felt this deep desire to have my own electric guitar.
How did you learn to play the guitar?
When I bought my first guitar, I was overwhelmed with excitement. I called my friend and asked him to come to my house to gaze upon my prized possession. He came over and we unboxed my first ever guitar. It was a cheap odd looking electric guitar that sounded horrible. It was the Nicki Minaj of guitars but I loved it.

My friend and I placed the freshly unboxed guitar on the floor. We decided it’s only logical that two people can play the better than one (more hands). That didn’t go well, that didn’t go well at all. After 30 minutes of making pure unadulterated noise, we gave up. The next day I went to Jarir book store to search for a book that would teach me how to play guitar, all while guilt of buying an instrument which I knew nothing about is eating me up. I found nothing in Jarir that can help me except a colorful children’s book. The only thing good I can say about that book is that it was indeed very colorful. I bought the book and tried very hard to learn something from it, but I made little progress. Then I met some British guitarists online and they gave me some pointers. Little by little, I started getting better. After that YouTube started exploding with tons of videos. Those helped me immensely, and through practicing every day, I reached my goal.

I was and still very passionate about playing guitar and writing music. There have been times however where weeks have passed without me being able to practice. That’s because I have the tendency to suddenly focus on a project and give it my full energy. It’s a curse and a blessing, because although these project can sometimes be costly and time consuming, they taught me a lot. Be it scuba diving, marine biology, electrical engineering, game design, programming, systems engineering, chemistry or astronomy. Luckily though, I would always miss my guitar soon after and return to it.

Who is/are your favorite musicians?
In the unremarkably mild winter of 2006, I was desperately searching the internet for guitar tutorials. I tried using an ancient file sharing software called Lime Wire to search for video guitar lessons and while I was weeding though the virus infested results I stumbled upon something remarkable. It was a short clip of Jason Newsted of Metallica playing a heavenly bass solo on stage followed by James Hetfield singing Nothing Else Matters. You all have to understand that I was into Rap and R&B at the time. It all changed at that moment. I felt like I never listened to music before, and started reading up on Rock n’ Roll, Blues, and Metal.

Why did you start a Youtube channel?
Ever since I was a kid, I always wanted to spread any knowledge I have acquired to those around me. When I was 12, I wrote my first “book” on an unused notebook I had. The book had four chapters: Biology of the body, The Sea, Plant life and Astronomy. After writing all the text, I sough pictures from magazines and newspapers and then cut and glued them where appropriate in the book. Before I can share my humble creation with the world, our maid throw it out by mistake while she was cleaning my often messy room. That however didn’t affect my love of spreading knowledge to others. For a while I used to teach others how to start fish aquariums and successfully breed the fish, then I went into my Wikipedia articles editing phase. Once I started becoming able at playing my guitar, few friends asked me to teach them how to play and I did. I remembered how much I struggled when I first started learning the guitar due to the lack of good guitar teachers locally. That made me come up with the idea of starting a YouTube channel and teach people how to play guitar. I did a quick YouTube search noticed the absence of good guitar lessons on YouTube for Arabs. That drove me more into stating Rusted Studios. I told my band mates and they loved the idea and started helping me with the filming and directing of those video lessons. I wanted and aspired to make a guitar lessons channel in Arabic, which has not only high production quality, but also very clear and easy steps for students to follow. Once I uploaded the first video, I got plenty of positive feedback that I used to improve the channel.
Why did you call it “Rusted Studios”?
When my friends and I formed our band, we started thinking of an awesome name for it. Many suggestions where suggested, and none seemed good enough (RAM, The Chick Flicks, Two and a half, …etc.). It only took us few years to come up with a name we liked; Rusted.

At first I was going to name the guitar lessons channel: Rock star, but since we planned to film the guitar videos at our band’s man cave, I thought rusted studios would be more appropriate. After that I contacted a designer and we started designing the identity of the channel.

What’s the biggest challenge you faced in your channel?
To be honest, not many. Due to my previous experiences, I already knew how to film, edit, publish and promote my videos.

The only challenge I can think of was finding time to spare. At the time I was establishing a company to promote prebiotics and healthy living, and that took much of my time.

How did you overcome the challenges?
When I was in college, I spent countless hours editing video, learning how to use various programs like Photoshop, After Effect, Visual Studio.Net and many more. This helped me a lot. Furthermore, the drummer in our band is into filming and photography, so he took care of all the camera work and as you can see from the videos, he has done an excellent job. I tried to balance my time between my job, my research at the time and Rusted Studios.
Do you play for a crowd? If you do, to whom?
Mostly friends and family (or people I want to impress). I would like to have the opportunity to play for a bigger crowed but due to my focus on my new project I just can’t find the time.
What are other music related activities do you do?
I like to write music and come up with new songs. I don’t share most of these as they are very personal. I write songs as a way of dealing with my emotions and internal struggles. That’s why most of the songs I write never get shared to anyone other than my band mates. I love singing as well, and thankfully I was able to train my vocal cords as well as my guitar playing to a level that allows me to enjoy myself and entertain those around me.